Types of Degrees Gene Therapy Majors Are Getting

The following table lists how many gene/genetic therapy graduations there were in 2019-2020 for each degree level.

What Can You Do With a Gene Therapy Major?

Below is a list of occupations associated with gene/genetic therapy:

How Much Do Gene Therapy Majors Make?

Gene/Genetic Therapy majors often go into careers with median salaries of $47,450. This median refers to all degree levels, so you may expect those with a more advanced degree to make more while those with less advanced degrees will typically make less.

In the 2019-2020 academic year, 2 schools offered some type of gene/genetic therapy program. The following table lists the number of programs by degree level, along with how many schools offered online courses in the field.

Is a Degree in Gene Therapy Worth It?

The median salary for a gene/genetic therapy grad is $47,450 per year. This is based on the weighted average of the most common careers associated with the major.

This is 19% more than the average salary for an individual holding a high school degree. This adds up to a gain of about $151,000 after 20 years! 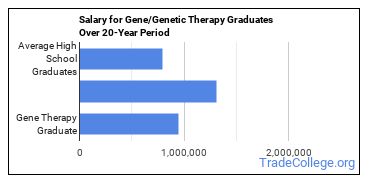 You may also be interested in one of the following majors related to gene/genetic therapy.